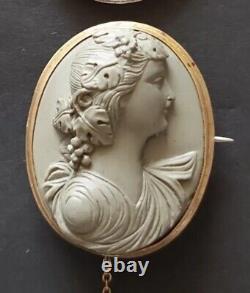 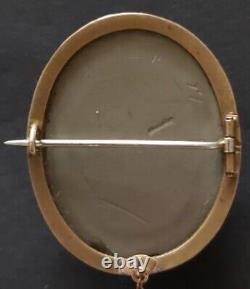 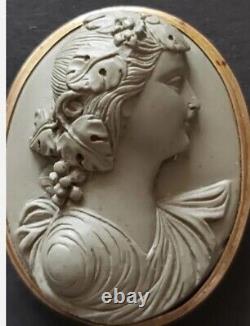 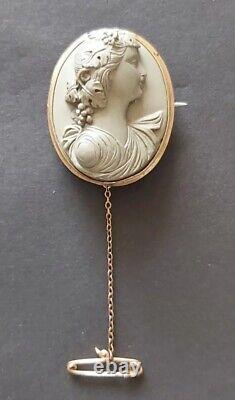 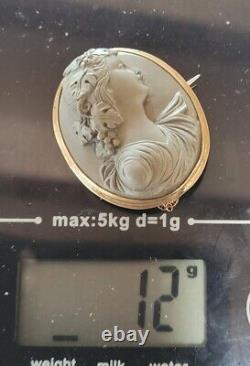 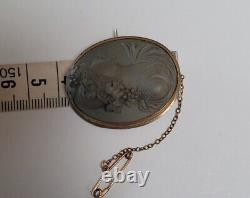 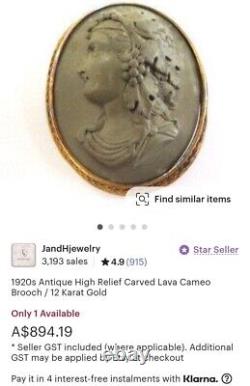 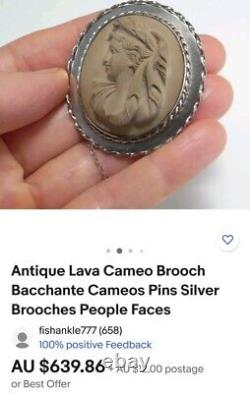 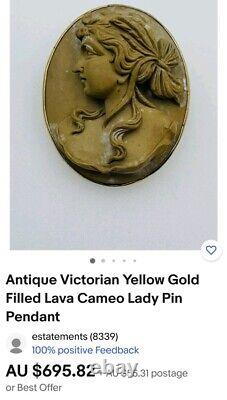 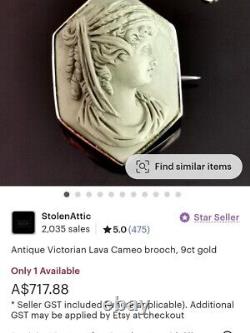 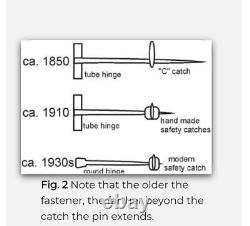 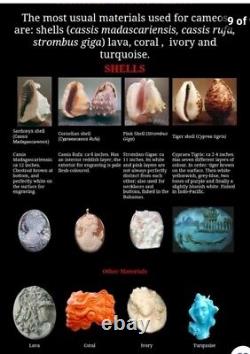 Dates to the Victorian Era 1850 - 1900, also confirmed by the date and style of the clasp, see second last photo. The frame is made of Pinchbeck gold, see Info below.

The brooch measures 38mm in height. Could be worn as a pendant with the acquisition of a brooch converter.

Please see pics for more details. Pinchbeck is a form of brass an alloy of copper and zinc mixed in proportions so that it closely resembles gold in appearance. It was invented in the early 18th century by Christopher Pinchbeck (died 1732), a London clock- and watch-maker. The inventor allegedly made pinchbeck jewellery clearly labelled as such. Pinchbeck jewellery was used in places like stagecoaches where there was a risk of theft. The original Pinchbeck was made by Christopher Pinchbeck and his descendants until the late 1800s. Later dishonest jewellers passed pinchbeck off as gold; Today, depending on the dealer, "Pinchbeck" can mean original Pinchbeck or Gilt Metal. The carv ing is of a Maeands (also known as Bacchantes) played an important role in Greek mythology, literature, and art. These women worshipped the Greek god Dionysos, and formed part of the god's entourage.

Maenads frequently appear together with the frenzied deity of wine in both myth and art, where they are depicted holding Dionysian symbols such as ivy, or grapes, and often shown wearing panther or fawn skins. One of the best ancient sources for the story of Dionysos and his Maenad followers is found in the Bacchae of Euripides. In this play, the power and destructive capacity of Dionysos are emphasized. This deadly aspect of the god is conveyed primarily through the women who are drawn into his mysterious realm.

These women are called Bacchae or Bacchantes celebrate Dionysos by abandoning themselves to the wild, liberating energy of nature. Bacchantes, when in the trance of the deity, leave behind home and family, and haunt the forests and mountains, their roles as wives, mothers, and sisters. The Grand Tour was the principallyThe Grand Tour. The Grand Tour was the principally 17th- to early 19th-century custom of a traditional trip through Europe, with Italy as a key destination, undertaken by upper-class of sufficient means and rank (typically accompanied by a tutor or family member or Chaperone) when they had come of age (about 21 years old). The interior of the Pantheon in the 18th century, painted by Giovanni Paolo Panini.

The custom-which flourished from about 1660 until the advent of large-scale rail transport in the 1840s and was associated with a standard itinerary-served as an educational rite of passage. Though it was primarily associated with the British nobility and wealthy landed gentry, similar trips were made by wealthy young men and women of other Protestant Northern European nations, and, from the second half of the 18th century, by some South and North Americans. By the mid-18th century, the Grand Tour had become a regular feature of aristocratic education in Central Europe as well, although it was restricted to the higher nobility. The tradition declined in Europe as enthusiasm for classical culture waned, and with the advent of accessible rail and steamship travel-an era in which Thomas Cook made the "Cook's Tour" of early mass tourism a byword starting in the 1870s.

However, with the rise of industrialization in the United States in the 19th century, American Gilded Age nouveau riche adopted the Grand Tour for both sexes and among those of more advanced years as a means of gaining both exposure and association with the sophistication of Europe. Even those of lesser means sought to mimic the pilgrimage, as satirized in Mark Twain's enormously popular Innocents Abroad in 1869.

The primary value of the Grand Tour lay in its exposure to the cultural legacy of classical antiquity and the Renaissance, and to the aristocratic and fashionably polite society of the European continent. It also provided the only opportunity to view specific works of art, and possibly the only chance to hear certain music.

It was commonly undertaken in the company of a cicerone, a knowledgeable guide or tutor. This item is in the category "Jewellery & Watches\Vintage & Antique Jewellery\Brooches & Pins".

The seller is "cherylb8668" and is located in this country: AU. This item can be shipped worldwide.